We were in Cambodia in July, which is one of the hottest and most humid times of the year to visit—especially if you're going to Angkor Wat, a gigantic complex of ancient ruins that doesn't have any air conditioning.

This is why most travel guides will recommend that you take a bus, taxi, or tuk tuk, and arrive as early as possible to get ahead of both the crowds and the heat. But that's not what we're gonna tell you, because that's not what we did. We're telling you that the best way to see Angkor Wat in a day is to simply find a reliable map, rent a motorcycle, and start exploring.

But that's not how things started off. We started off by sleeping in and not getting there before the crowds. Instead, we arrived at peak tourist time. The place was packed with an apocalyptic number of tourists, and the sun was already beating down on us. We were drenched in sweat just by walking to the first temple. 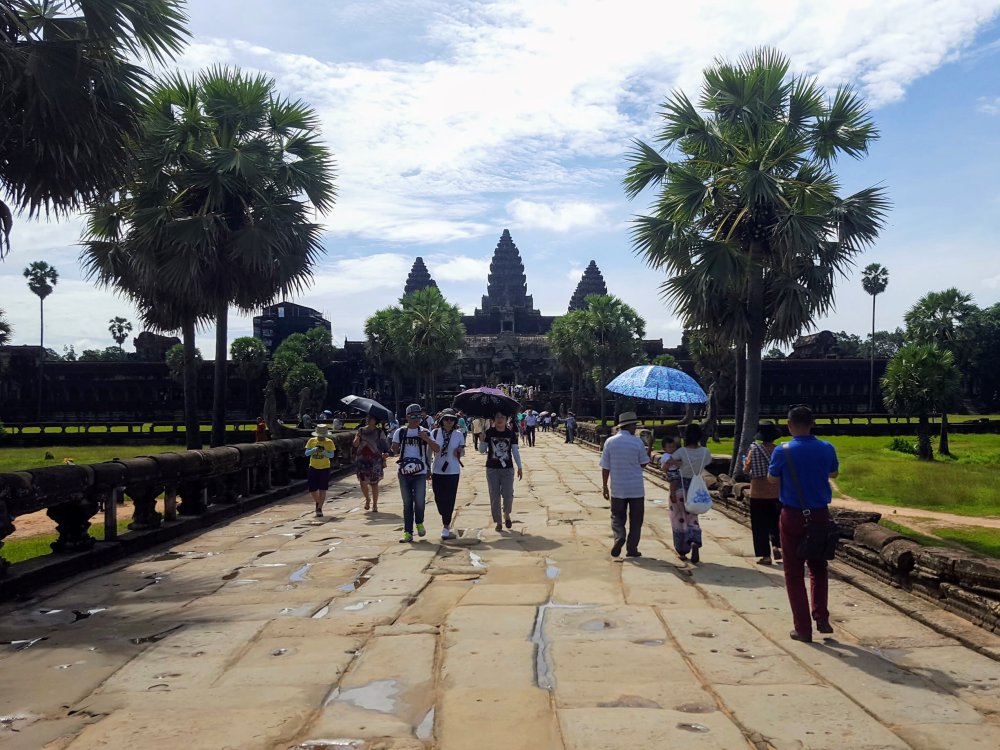 After hiding in the shade at the main Angkor Wat temple, we scooted over to Angkor Thom and quickly hit a wall. The heat and the people were too much for us. After less than two hours, we tapped out, hopped back on our scooter, and scooted back to our accommodation and the safety of air conditioning and the pool. 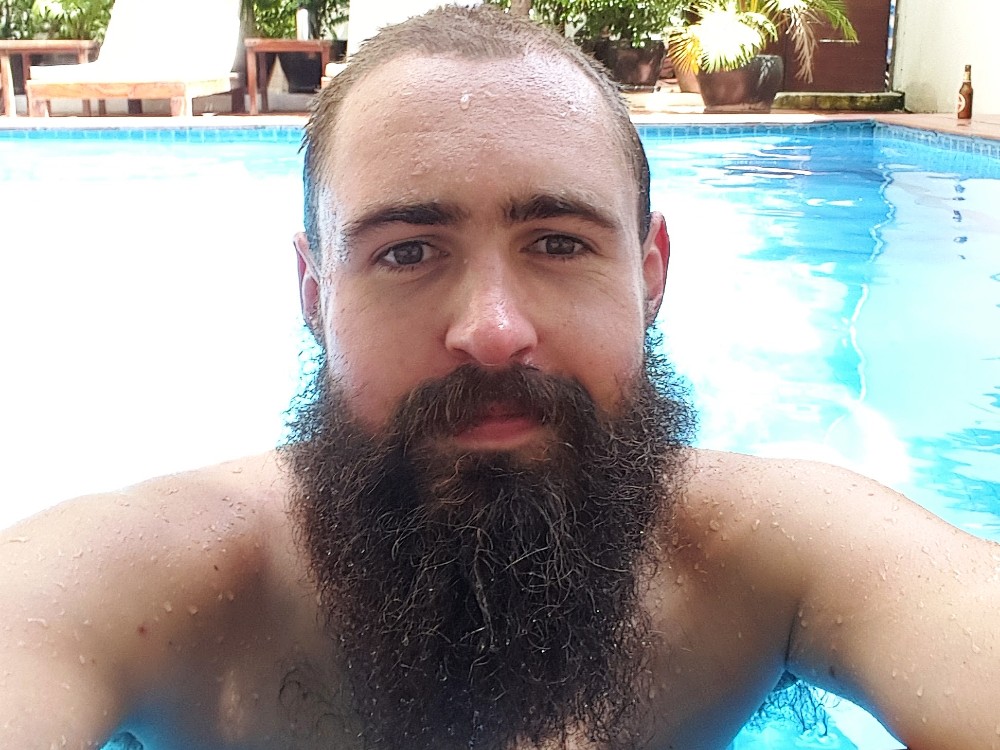 The price of Angkor Wat is steep, at $37 USD per person for the day. After taking a moment and gathering ourselves, we decided to rally in the afternoon for another go at the Angkor Wat complex. We'd already paid the fee and rented the scooter. Now, we decided to focus on checking out the sites further away from the main Angkor Wat/Angkor Thom areas—and it paid off.

We were able to find a few places with very few other tourists. There are also quite a few roads that take you right through the ruins. Driving through nearly millennia-old stone structures on a motorcycle is a crazy experience. For example, we drove down this road: 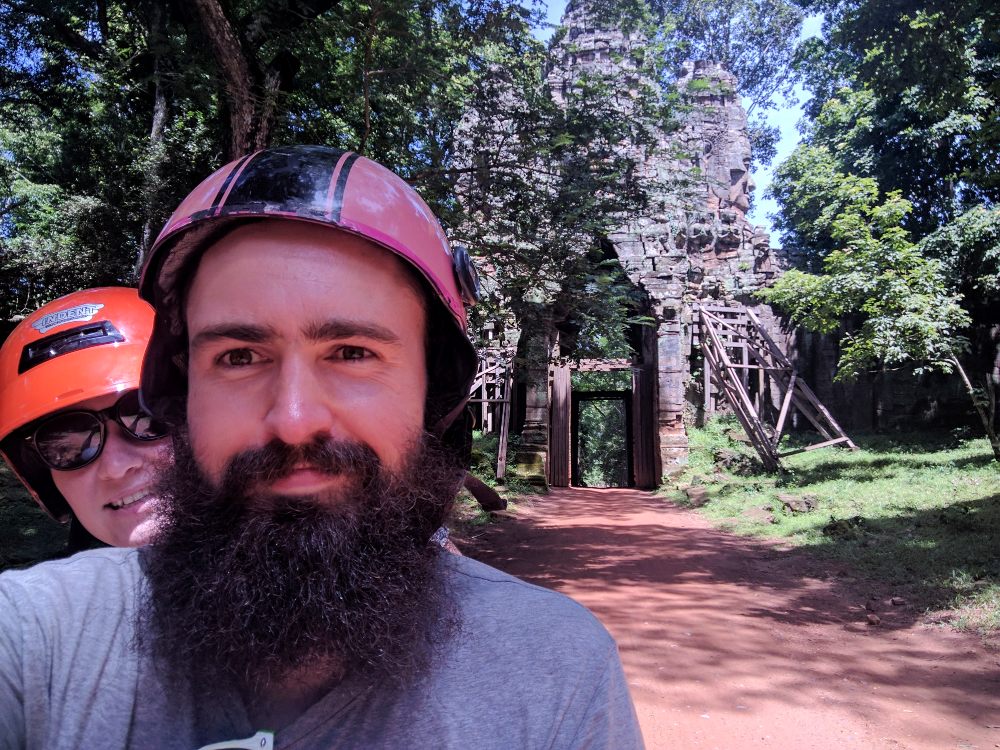 There's a lot more to these ruins than than just the main Angkor Wat and Angkor Thom sites. There are tons of other temples and ruins located off of this main strip that are visited by far fewer people, and the best way to access these is by renting a motorcycle and finding your way through the maze of roads.

We quickly realized that we were able to get between sites on a motorcycle way quicker than most other people. Instead of hiring a tuk tuk driver for the day, or taking a tourist bus, or grabbing a taxi between locations, we could simply hop-on-hop-off of our motorcycle and go almost anywhere. If we happened to come across a parking lot that was jam-packed, we could skip it and go on to the next site. 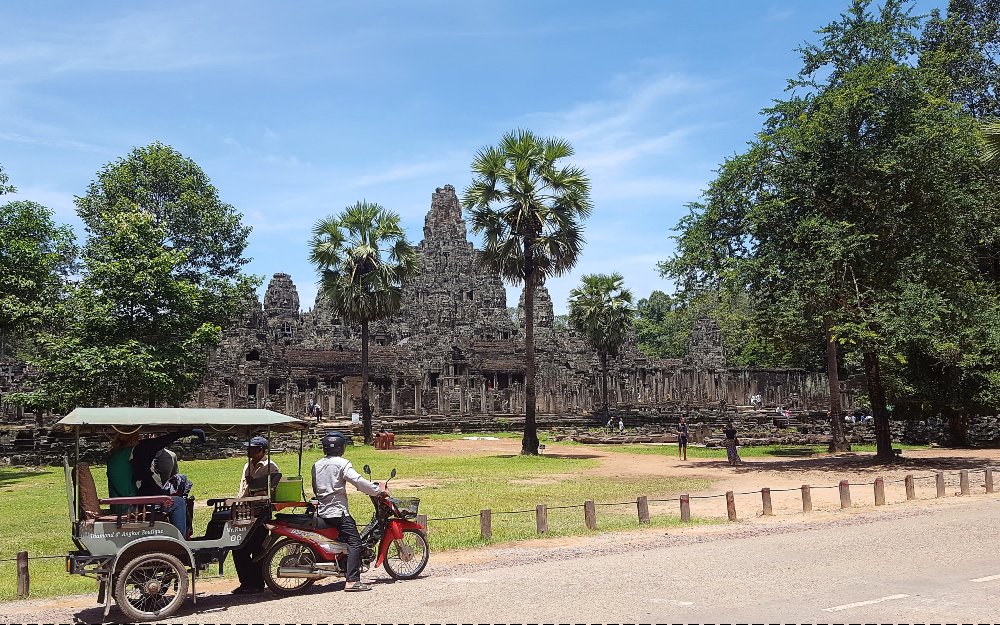 One thing we didn't do was hire a guide to take us through the ruins. We basically just roamed through with little context, largely because we were on a 4-month trip and a tight budget. There's so much to see in this complex that it might be worth spending two or three days and getting a guide for part of it—especially if you're into ancient history.

For us, having only one day to explore, we found renting a scooter and zipping between sites on our own schedule worked best for us. You can cover a lot more ground in a short amount of time by having your own transportation, and this also allows you to spend as much or as little time in a place as you like (there were a couple of times we walked in and left pretty quickly, and others where we lingered). 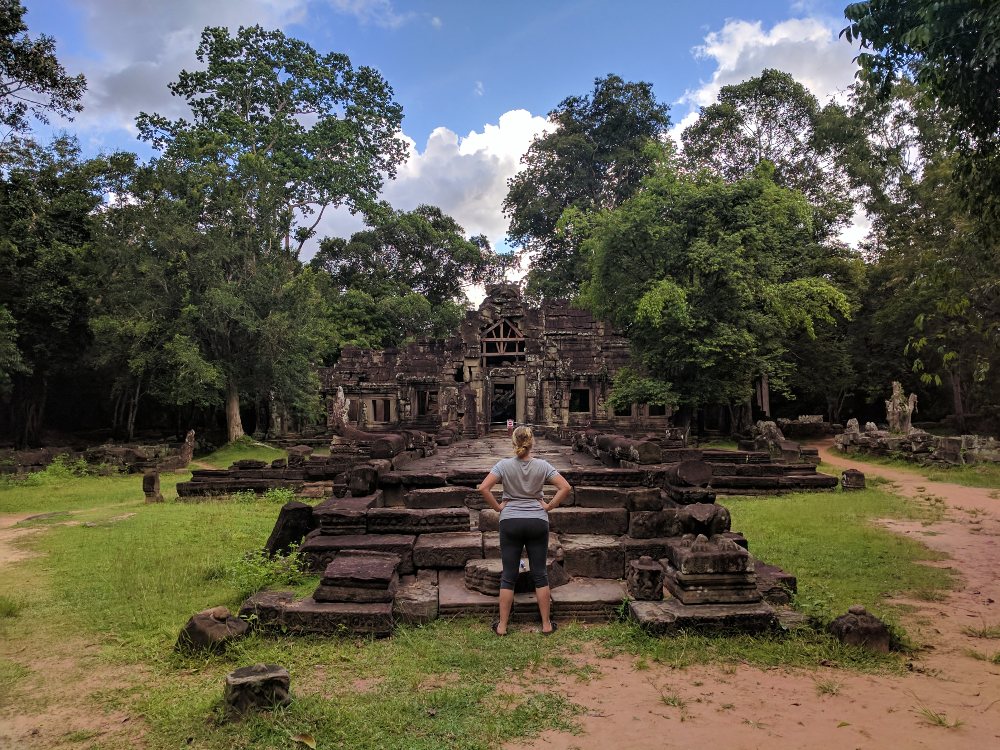 Once we were able to escape the crowds and experience the ruins on our own terms, we enjoyed our time at Angkor Wat way more. We even ended up staying until the very end when the ruins closed for the day and we were finally told we had to get out!

Going back, I would love to get a more in-depth guided experience and delve deeper into some of the history of Angkor Wat. Not all guides are created equal, and they can be costly, which is why we typically skip this part. If you're a long-term traveller on a budget, a guide certainly isn't necessary—you can act as your own guide through the power of the internet and Google Maps. 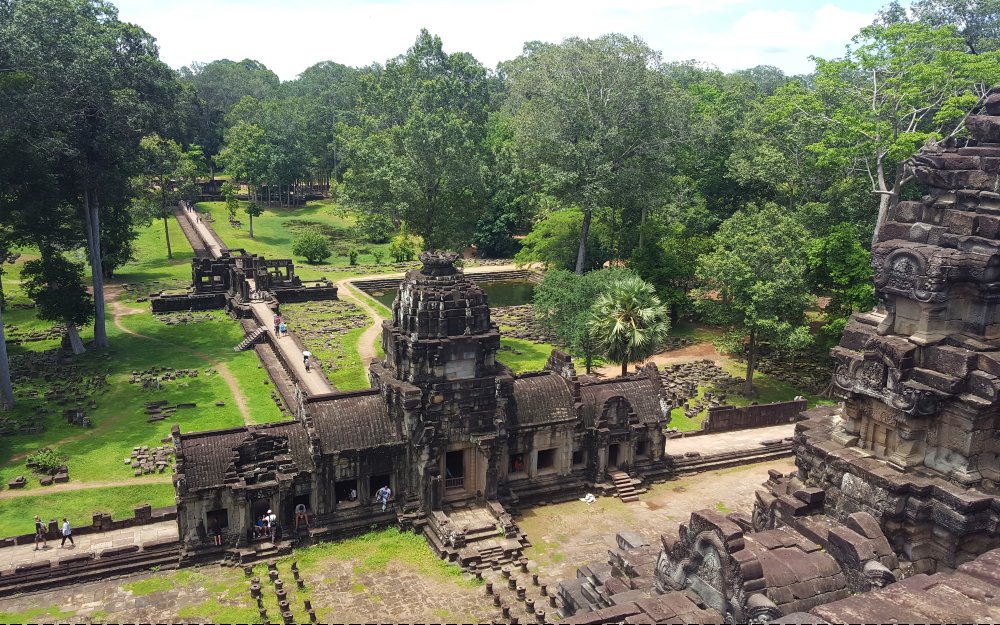 Angkor Wat is a must-see, even for people like us who hate tourist traps and can't stand huge crowds of people. Fortunately, we were able to find a way to explore these ruins on our own terms, and even found a few isolated spots away from the crowds where we could find some peace and solitude among these stunning ruins.

In All Farness is a digital publication about world travel. We love going places off of the beaten path, discovering new things, sharing our experiences and occasional misadventures, and striving to better understand this huge world we all share.

As individuals, we're also deeply interested in nature and the outdoors, veganism, and living a healthy and sustainable lifestyle.

Search In All Farness